MUMBAI: Superstar Akshay Kumar on Friday gave a shout out to the whole team of recently released Amazon Prime Video film ‘Chhorii’ for bringing out the social issue of female feticide in a subtle way through powerful storytelling and strong narrative.

While the audiences are catching up with ‘Chhorii’, it most certainly caught the eye of Akshay, an actor who has been a frontrunner towards highlighting social issues predominate in society through his films.

Akshay took to his social media, to share a video that rightly so, highlights what women have been doing and achieving, but also leaves the audiences with a message towards the end – that will make them ponder – What if those Chhorii’s weren’t given a chance? Had that been the case where we had a world without women, we never would have got the chance to marvel at their achievements and be inspired by them.

Akshay wrote in his post, “As father to a girl who is my lifeline, I was deeply moved, and equally concerned, about this. Kudos for taking up this sensitive topic, @vikramix @Nushrratt @Abundantia_Ent . Power to you.” 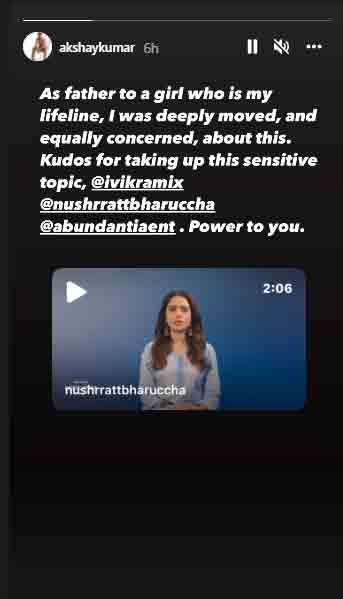 In the video, the film’s lead Nushrratt Bharuccha talks about the women achievers of India and how they have done a wonderful job as they got the right opportunities to showcase their talent. Be it across the fields of sport, medicine, acting, politics, these daughters have overcome challenges to break the glass ceiling and be an inspiration for one and all.

Nushrratt will next be seen in ‘Janhit Mein Jaari’, and ‘Ram Setu’ alongside Akshay and Jacqueline Fernandez.