New Delhi: Comedienne Mallika Dua penned an emotional note after her father and veteran journalist Vinod Dua succumbed to COVID-19 on Saturday (December 4). In another social media post, Mallika further informed that the cremation will take place on Sunday (December 5) at Lodhi crematorium at  12 noon.

The comedian remembered her father as a ‘self made, lion-hearted legend who roared in rebellion till his last breath’ as she bid him goodbye.

She wrote, “There will never be another like you. My first and best friend. My Papaji. Very few live as large and glorious a life as you did. Always up for a good time. Always ready for a challenge. Loved a good fight. Always there for his children. A self made, lion-hearted legend who roared in rebellion till his last breath. He feared nothing, least of all death. Thank you for being the BEST dad in the world.”

“I’m sure you and mama are eating chapli kebab and discussing “mallika itna kyun ladti hai sabse. Kaise manage karegi” The most courageous, irreverent , compassionate and funny man I know. What a guy. An ordinary boy born in Nabi Karim who took on the high and mighty and won, till the end. Padmashree Vinod Dua. Even at your weakest, you gave Indian Journalism a landmark judgment. No journalist will be randomly slapped with a sedition case because Vinod Dua fought that fight for them, as he always has,” she further wrote.

“Heaven is just so f***ing lucky, it has my whole entire life. We won’t live in fear and grief forever. We will live with pride and gratitude because look at the extraordinary parents we got. I wouldn’t trade my destiny for anything. It gave me Vinod and Chinna. Nobody gets double lucky. Bohot Umda”, she concluded. 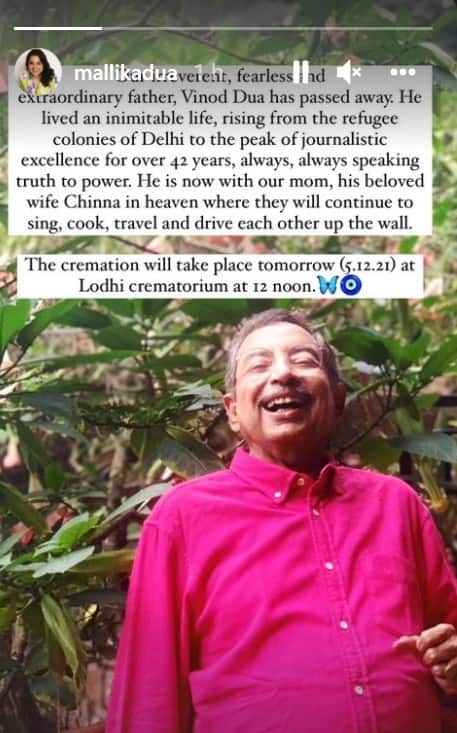 “Our irreverent fearless and extraordinary father, Vinod Dua has passed away. He lived an inimitable life, rising from the refugee colonies of Delhi to the peak of journalists excellence for over 42 years, always, always speaking truth to power,” his daughter Mallika Dua wrote on social media as she broke the news of her father’s demise.

The journalist, who was hospitalised earlier this year with COVID-19, had been suffering from prolonged illness and was critical for the past few days.

Dua was a well-known journalist in Hindi broadcast and had worked in organisations like Doordarshan, NDTV, and The Wire.

Vinod Dua is survived by two daughters, Bakul Dua, who is a clinical psychologist, and Mallika Dua, a comedian.

Are you a LOTR fan? Check out ‘Lord Of The Rings: The Rings of Power’ series title video! | Web Series News