New Delhi: The news of the sudden demise of Chief of Defence Staff (CDS) General Bipin Rawat has shaken the whole nation. Actor Sidharth Malhotra also expressed grief over the sad news and shared his recent picture with the late dignitary, on his social media handle. 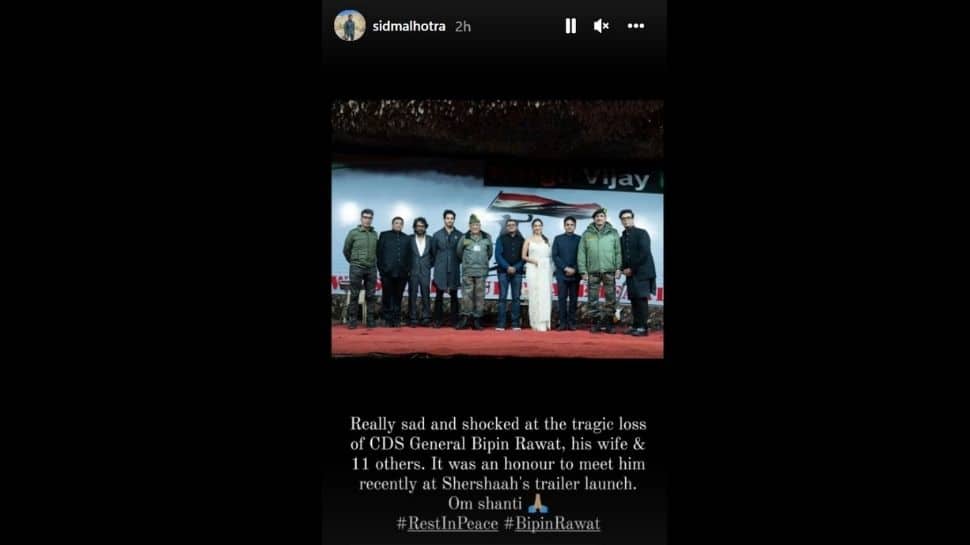 Sidharth who played the titular role in the recently released patriotic movie ‘Shershaah’, took to his Instagram handle and shared a group picture from the movie’s trailer launch held at Kargil on the eve of Kargil Vijay Diwas, this year.

Sharing the picture, Sidharth wrote, “Really sad and shocked at the tragic loss of CDS General Bipin Rawat, his wife, and 11 others. It was an honour to meet him recently at Shershaah’s trailer launch. Om Shanti #RestIn Peace #BipinRawat.”

The sad news was confirmed by Indian Air Force today through their official Twitter handle that read, “With deep regret, it has now been ascertained that Gen Bipin Rawat, Mrs Madhulika Rawat, and 11 other persons on board have died in the unfortunate accident.”

The helicopter crashed around noon shortly after it took off from the Air Force base in Sulur, Coimbatore, for Wellington in the Nilgiri Hills. The General was heading to the Defence Services Staff College in Wellington to address the faculty and student officers of the Staff Course today.

A veteran of counterinsurgency warfare, CDS Rawat served in the most difficult terrains including northern and eastern commands.

CDS Rawat was commissioned into the Indian Army in December 1978. He previously served as Chief of the Army Staff from January 2017 to December 2019.