Mrs Madhulika Rawat: The force behind the force that General Bipin Rawat was | India News


I remember meeting Mrs Madhulika Rawat on a sunny day with cold, pleasant air flowing dimly. It was not a normal day for humid Delhi afternoons during monsoons. She had just arrived at the India International Center in August 2019 for the launch of ‘Love Story of a Commando’, my second book which was just acquired by Westland Amazon.

I was still the young naïve writer who was new to the world of publishing and I never hoped that she would accept to launch my book. She was then ex officio President AWWA (Army Wife Welfare Association) as the wife of the then Indian Army Chief General Bipin Rawat. As the first lady of our glorious fraternity where bonhomie and camaraderie prevail as dominant ethos, her role was immense. She kept on travelling from one part of the country to another in quest of establishing the right balance between the personal and professional life of faujis and their families. Her job would be to look after the millions of fauji families scattered all across the nation along with looking after the ‘Veer Naris’ who lived as women left behind by our ‘killed in action’ soldiers. She was especially sensitive about this issue and worked day and night to rehabilitate them. Then the disabled children of fauji families, Asha Schools were also close to her heart. I did not imagine she would find time to attend and launch the book of a newbie writer on the block who was just out with her fiction.

But I ignored one fact about me too, that I was an army wife; a woman married to a man in olive greens and she considered it her great responsibility to encourage and support all the Army wives. So security clearances took me some time but there she was standing and smiling before me with all her warmth in solidarity with the endeavour of a young Army Wife. It was a rare privilege and I would be forever grateful. I don’t know how many people men, women and children interacted with her that day some even discussed their personal problems which she listened intently but never for once did she stop smiling, hugging, patting and more. She was extremely warm, a people’s person just like her husband General Bipin Rawat had been. When she talked, she talked like feathers; sweetly, lightly and affectionately. No wonder the same warmth flowed through the entire chain of command in an organization known strictly for its hierarchy. It is everything here bring one person who is not good enough at the top at any level in the Army and watch out how the entire structure crumbles but they as the first couple by General Bipin Rawat first being as Chief of Army Staff and then as first Chief of Defense Staff of India ensured that only right spirits, bonhomie and values flew throughout the organization.

Now that she is gone too soon, too suddenly words are at loss. We have mourned and cried as one fraternity. It is a huge loss to all the Armed Forces Wives to lose her like this. But we are proud too. We are a fraternity of braves and she went epitomizing being an Armed Forces Wife. She went bravely along with her soldier who she had vowed to walk beside in thick and thin.

On the fateful unfortunate day of 8 December 2021 she was accompanying General Bipin Rawat on his way to Staff College Wellington in an official capacity as President DWWA (Defense Wives Welfare Association) while General Rawat was to deliver a lecture to the bright future leaders from all the arms of Armed Forces; Army, Navy and Airforce who were soon to assume commands to brief them about his visions of synergy among all the three forces so that right ethos and conduct flow unanimously throughout the chain of command.

Mrs Madhulika Rawat was to play the equal role as President DWWA. It was her job to tell all the wives who were soon to join their husbands during their commands of various smaller units where these young wives were to play an important job it was onto them to maintain an environment of peace and amiability in their respective units so that soldiers could work with complete ease and focus. Her vision and ideas were to shape the future environment of various important structures and also synergize various welfare programs that various arms run for the betterment of their armed forces wives, widows and children.

This is what she had done all her life throughout the illustrious career of General Bipin Rawat. 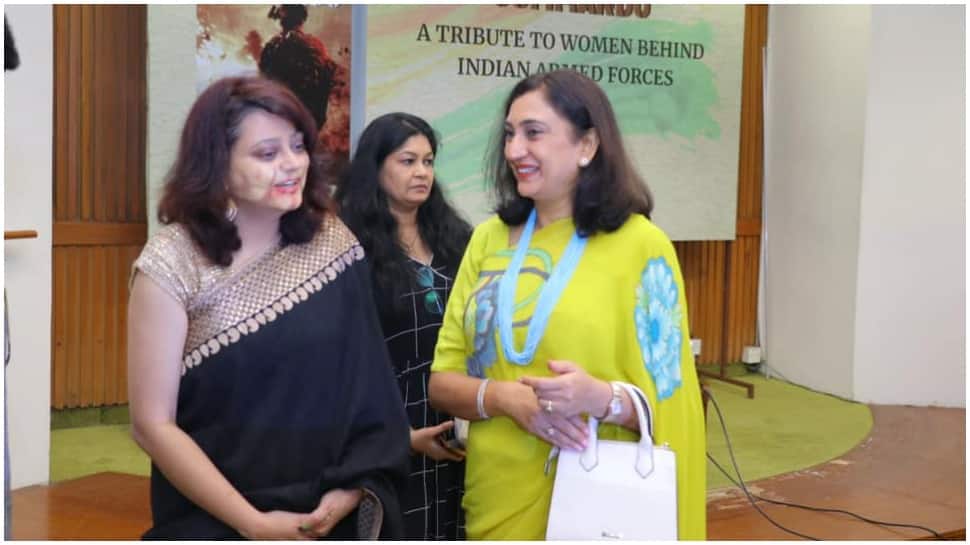 If he was one of the finest generals of all the time and best of recent times it was Mrs Madhulika Rawat’s immense support that shaped his career and she did it at her cost. She was an accomplished woman, born on 7th February 1963 in Shahdol Madhya Pradesh as the daughter of late politician Mrigendra Singh she had been an alumnus of prestigious Scindia Kanya Vidyalaya Gwalior who eventually graduated from Delhi University. She could have done anything and be anyone but she chose to be the ‘The Force behind the Forces’ She chose to support her soldier unconditionally because he served her mother nation and no job was greater than this. And she did it with utmost devotion serving the families of armed forces fraternity throughout her life providing peace of mind and also strength to the glorious General who reached the top where no one has reached ever.

Both of them contributed immensely to the nation and served it selflessly. It is a huge loss not just to the armed forces fraternity but also to the entire nation. We can see how citizens all across the nation are crying at this untimely unfortunate demise. It was uncalled for but there are some facts we can not change.  We, as defence force personnel wives, mourn her loss immensely. The loss of both their daughters is even more heartwrenching who are now without both their parents. The same goes for all the families who have lost their loved ones in this tragic crash of the IAF Mi 17 V  helicopter in Tamilnadu. Their grief can not be imagined. I pray to God that they get the strength to move on and carry forward the legacies of their loved ones. Rest in Peace Dear All. Nation will never forget you. Jai Hind!