New Delhi: The biggest wedding of the year has culminated into a beautiful union of two stars – Katrina Kaif and Vicky Kaushal! The newlyweds took to Instagram on Thursday evening (December 9) to share stunning pictures from their traditional Hindu wedding.

While Katrina looked breathtaking in a red lehenga set designed by renowned brand Sabyasachi, Vicky had donned a fancy sherwani with subtle embroidery on it. The duo had captioned their Instagram post with a heartwarming caption, asking for their friends, family and fans’ blessings.

They wrote, “Only love and gratitude in our hearts for everything that brought us to this moment. Seeking all your love and blessings as we begin this new journey together.”

Vicky Kaushal had recently featured with Bear Grylls in an episode of the adventure reality show ‘Into The Wild’. 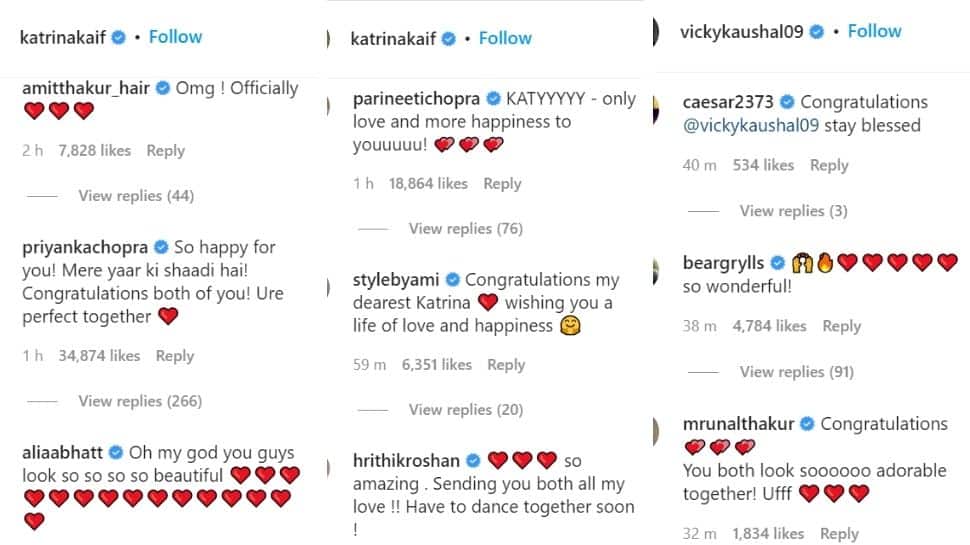 Vicky Kaushal and Katrina Kaif are officially married now! Katrina looked gorgeous in a red lehenga, while Vicky was dapper in a cream sherwani.

As their fans eagerly awaited to catch pictures from their wedding, the newlyweds today took time out of their schedule and dropped first officials photos of their matrimony on social media.

It is to be noted that Katrina and Vicky tied the knot in a hush-hush ceremony at Six Senses Fort Barwara, Rajasthan, in the presence of their close family friends and relatives.

The first photo shows them exchanging garlands. Katrina is seen wearing bridal golden kalire as she puts the ‘varmaala’ around Vicky’s neck. In the next photo, the newlyweds are seen smiling as they are seated next to each other holding hands.

The last photo shows them lost in each other’s world. Katrina can be seen smilingly looking at her Mr Right.

This is the first time Katrina has made things official with Vicky. The actors, who are said to have been dating each other for almost two years, had made their best efforts to keep things under wraps and away from the media glare.